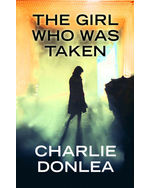 The Girl Who Was Taken

Megan McDonald is a high school senior when she disappears from the small town of Emerson Bay. Hope is nearly lost until, two weeks later, she escapes from a bunker in the woods. A year later, the inspiring account of her ordeal has made Megan a celebrity. But there’s one inconvenient detail. Her classmate, Nicole Cutty, also went missing that night.