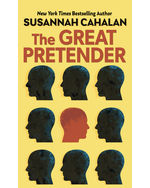 
The Great Pretender: The Undercover Mission That Changed Our Understanding of Madness

In the 1970s a Stanford psychologist named David Rosenhan and seven other people went undercover into asylums around America to test the legitimacy of psychiatry’s labels. All eight emerged with alarming diagnoses and even more troubling stories of their treatment. Rosenhan’s watershed study broke open the field of psychiatry, closing down institutions and changing mental health diagnosis forever. But, as Cahalan’s explosive new research shows in this real-life detective story, very little in this saga is exactly as it seems. What really happened behind those closed asylum doors?

“The Great Pretender reads like a detective story, with Cahalan revealing tantalizing clues at opportune moments so we can experience the thrills of discovery alongside her . . . What she unearthed turned out to be far stranger, as documented in her absorbing new book, The Great Pretender. It’s the kind of story that has levels to it, only instead of a townhouse it’s more like an Escher print. On one level: A profile of Rosenhan and his study. On another: Cahalan’s own experience of researching the book. And on a third: The fraught history of psychiatry and the pursuit of scientific knowledge."

“Cahalan’s research is dogged and her narrative riveting, leading us from red herring to clue and back with the dexterity of the best mystery novelists. Then she builds her case like a skilled prosecuting attorney."

“A thrilling mystery and a powerful case for a deeper understanding of mental illness.”

“Cahalan’s passionate and exhaustive reexamination of the famous research ‘On Being Sane in Insane Places’ by Stanford psychologist David Rosenhan is a riveting read . . . A terrific piece of detective work [with] fascinating insights into the mental health controversies that have swirled ever since the study’s publication.”