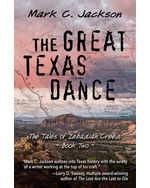 The Tales of Zebadiah Creed (Book 2)

Zebadiah Creed tells a tale of the Texas Revolution, not as history, but a personal portrayal of men and the consequences of their decisions, sometimes made during the savagery of battle, most times made in quiet. Their desperate acts allow them no way out other than through loyalty and friendship, or ultimate betrayal. In 1836, Texas settlers are in revolt against the Mexican government. Zebadiah joins the cause, eventually arriving at the Alamo. With the Alamo’s future in peril, Zebadiah and his friend Grainger must take on the dangerous mission of delivering a letter to General Sam Houston pleading for support.