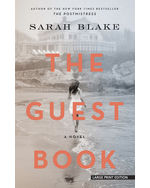 “Breathtaking . . . Blake saturates each scene with sensuous and emotional vibrancy while astutely illuminating sensitive moral quandaries. Blake deftly interrogates the many shades of prejudice and ‘the ordinary, everyday wickedness of turning away.’ Blake’s brilliant and ravishing novel promises to hit big.”

“The story of the Miltons engages not just with history and politics, but with the poetry of the physical world. This novel sets out to be more than a juicy family saga ― it aims to depict the moral evolution of a part of American society. Its convincing characters and muscular narrative succeed on both counts.”

“This powerful family saga . . . is potent and mesmerizing.”

“Thought-provoking and propulsive . . . Welcome to old money, new heartbreak, big secrets, and the kind of mouthwatering picnics nobody packs in real life (boiled eggs, tin of sandwiches, bottles of gin). But the North Star of Sarah Blake’s The Guest Book isn’t the Milton family ― although they are fascinating, even the ghosts ― it’s the Maine island cottage where they spend their summers.”