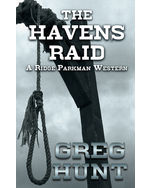 They had killed one Marshal and held another captive. Now it was up to Parkman to set things right . . .

Ridge Parkman didn’t have much choice about the mission Captain Lott assigned him. It meant getting arrested, breaking out of jail with two bloodthirsty outlaws, and convincing them he was one of their kind. They would lead him to the impenetrable Havens. And if he lived long enough, that was where the hard part of Parkman’s mission would begin.