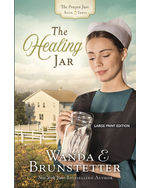 Lenore Lapp is an Amish schoolteacher in her late twenties still living with her parents and grandparents. She thought love had passed her by until she meets Jesse Smucker, a widower with a baby daughter. She quickly falls in love and accepts Jesse’s proposal of marriage, but Jesse breaks off their engagement when he realizes he can’t marry only for convenience. Resigned to living single, Lenore throws herself into caring for her elders. While working in her grandmother’s garden, she digs up an old jar. Will Lenore find healing for her broken heart and solve long-buried family secrets by reading the note contained inside?