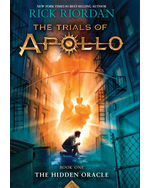 First in a new series from the “Storyteller of the Gods” (Publishers Weekly) and author of three #1 New York Times bestselling middle grade series.

After angering his father, Zeus, the god Apollo is cast down from Olympus. Now a weak and disoriented teenage boy in New York City, the four-thousand-year-old deity can think of only one place to go . . . an enclave of modern demigods known as Camp Half-Blood.