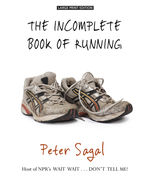 The Incomplete Book of Running

A collection of enlightening nonfiction titles that will appeal to today’s life-long learners. Titles will include a range of topics from how-to, financial advice, health issues, personal growth, and other high-interest topics focused on the lifestyle of today’s large print reader.

On the verge of turning forty, Peter Sagal started running seriously. And much to his own surprise, he kept going. Now the popular public radio host and Runner’s World columnist shares lessons, stories, and advice gleaned from running the equivalent of once around the earth. Sagal reflects on the routes he’s traveled, from the absurdity of running charity races in his underwear — in St. Louis in February, to the experience of being a guide for visually impaired runners, to the triumphant running of the post-bombing Boston Marathon in 2014. With humor and humanity, Sagal writes a funny, wise, and powerful meditation on running and life.