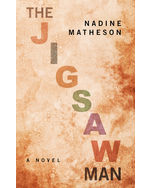 An Inspector Angelica Henley ThrillerDetective Inspector Anjelica Henley, of the Serial Crimes Unit, is called to a crime scene in which dismembered body parts from two victims have been found by the river. The modus operandi bears a striking resemblance to Peter Olivier, the notorious Jigsaw Killer, who has spent the past two years behind bars. When he learns that someone is co-opting his grisly signature, he decides to take matters into his own hands. Can DI Anjelica Henley apprehend the copycat killer before Olivier finds a way to get to him first? Or will she herself become the next victim?