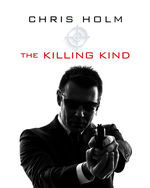 A New York Times Editors' Choice
Winner of the Anthony Award for Best Novel
Nominated for the Lefty Award for Best World Mystery Novel
Nominated for the Best Thriller Barry Award
Nominated for the Macavity Award for Best First Mystery
Once a covert operative for a false-flag unit of the US military, Hendricks was presumed dead after a mission in Afghanistan went sideways. He left behind his old life — and beloved fiancée — and set out on a path of redemption . . . or perhaps one of willful self-destruction.
Now Hendricks makes his living as a hitman entrepreneur of sorts — he only hits other hitmen. For ten times the price on your head, he'll make sure whoever's coming to kill you winds up in the ground instead. Not a bad way for a guy with his skill-set to make a living — but a great way to make himself a target.

“The wild and furious action, the unusual plot featuring assassin versus assassin, and the memorable characters all keep the reader racing through this skillfully told tale of vengeance.”