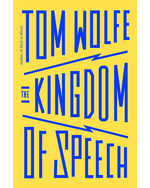 The Kingdom of Speech

Tom Wolfe, whose legend began in journalism, takes us on an eye-opening journey that is sure to arouse widespread debate. The Kingdom of Speech is a captivating, paradigm-shifting argument that speech — not evolution — is responsible for humanity's complex societies and achievements.

“In lively, irreverent, and witty prose, Wolfe argues that speech, not evolution, sets humans apart from animals and is responsible for all of humankind's complex achievements....Wolfe's vibrant study manages to be clever, funny, serious, satirical, and instructive.”

“In this mettlesome, slyly funny takedown, Wolfe spotlights two key scientific rivalries, each pitting a scrappy outsider against the academy. . . . Wolfe's pithy and stirring play-by-play coverage of compelling lives and demanding science transforms our perception of speech. . . . As always, white-suited Wolfe will be all over the media . . . stirring things up and sending readers to the shelves.”

“A fresh look at an old controversy, as a master provocateur suggests that human language renders the theory of evolution more like a fable than scientific fact. . . . Wolfe throws a Molotov cocktail at conventional wisdom in a book that won't settle any argument but is sure to start some.”