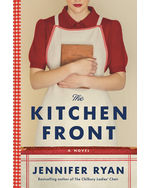 Two years into World War II, Britain is feeling her losses: The Nazis have won battles, the Blitz has destroyed cities, and U-boats have cut off the supply of food. In an effort to help housewives with food rationing, a BBC radio program called The Kitchen Front is holding a cooking contest — and the grand prize is a job as the program’s first-ever female co-host. For four very different women, winning the competition would present a crucial chance to change their lives.