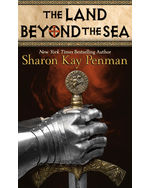 
The Land Beyond the Sea

The Kingdom of Jerusalem, also known as Outremer, is the land far beyond the sea. Baptized in blood when the men of the First Crusade captured Jerusalem from the Saracens in the early 12 century, the kingdom defined an utterly new world, a land of blazing heat and a medley of cultures, a place where enemies were neighbors and neighbors became enemies. At the helm of this growing kingdom sits young Baldwin IV, an intelligent and courageous boy committed to the welfare and protection of his people. Despite Baldwin’s dedication, he is afflicted with leprosy at an early age and the threats against his power and his health nearly outweigh the risk of battle.

“[A] riveting page-turner, and Penman’s well-honed skill for weaving deeply researched details into epic tales is on full display. Fans of medieval historical fiction won’t want to miss this.”

“Penman excels at depicting medieval warfare and the unintended, often disastrous consequences of the best-laid strategies. She is equally adept at depicting the rivalries and internecine strife that roil Baldwin’s court. . . . This book amply illustrates the extent to which fortune and personality dictated victory, détente, and defeat on both sides. A teeming 12th-century tapestry which Penman renders coherent, even eloquent.”