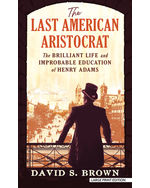 
The Last American Aristocrat: The Brilliant Life and Improbable Education of Henry Adams

Henry Adams is perhaps the most eclectic, accomplished, and important American writer of his time. His autobiography and modern classic The Education of Henry Adams was widely considered one of the best English-language nonfiction books of the 20th century. He’s remembered today as a historian, a political commentator, and a memoirist. Presenting intimate and insightful details of a fascinating and unusual American life and a new window on 19th century U.S. history, The Last American Aristocrat shows us a more “modern” and “human” Henry Adams than ever before.