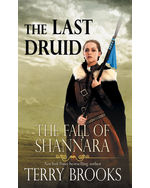 A New York Times Bestseller
The Fall of Shannara (Book 4)

Since he began the Shannara saga in 1977, Terry Brooks has had a clear idea of how the series should end, and now that moment is at hand. As the Four Lands reels under the Skaar invasion — spearheaded by a warlike people determined to make this land their own — our heroes must decide what they will risk to save their home. Even as one group remains to defend the Four Lands, another is undertaking a perilous journey across the sea to the Skaar homeland, carrying with them a new piece of technology that could change the face of the world forever. And yet a third is trapped in a deadly realm from which there may be no escape.