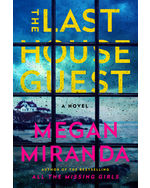 Littleport, Maine, has always felt like two separate towns: a vacation enclave for the wealthy and a simple harbor community for the year-round residents. Friendships almost never develop between the two camps — but that’s just what happens with visitor Sadie Loman and Littleport resident Avery Greer. Each summer for almost a decade, the girls are inseparable — until Sadie is found dead. While the police rule the death a suicide, Avery feels that some in the community, including a local detective and Sadie’s brother, Parker, blame her. Someone knows more than they’re saying, and Avery is intent on clearing her name before the facts get twisted against her.