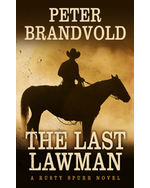 First in a brand new series!

Federal Deputy Marshal Spurr Morgan may be an old dog in the business of tracking down desperados‚ but his instincts remain unmatched. Spurr has his sights set on Clell Stanhope‚ the notorious leader of a gang called the Vultures. Not only has Clell lured every last tin star into his bloody trap‚ but he’s littered his trail with dozens of innocents. Spurr thinks he may be the last man standing — until a half-breed by the name of Yakima Henry offers his services.