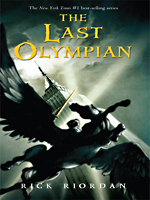 All year the half-bloods have been preparing for battle against the Titans, knowing the odds for victory are grim. Kronos’s army is stronger than ever. While the Olympians struggle to contain the rampaging monster Typhon, Kronos begins his advance on New York City where Mount Olympus stands unguarded. As the battle for Western civilization rages on the streets of Manhattan, Percy faces a terrifying suspicion that he may be fighting against his own fate.

"Riordan masterfully orchestrates the huge cast of characters and manages a coherent, powerful tale at once exciting, philosophical and tear-jerking. The bestselling series’ legions of fans will cheer their heroes on and rejoice in such a compelling conclusion to the saga."