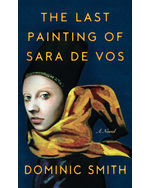 A rare seventeenth-century painting — the only known surviving work of a woman who defied the expectations of her time — links three lives, on three continents, over three centuries in this exhilarating new novel from the critically acclaimed author of The Beautiful Miscellaneous.

“Highly evocative of time and place, this stunning novel explores a triumvirate of fate, choice, and consequence and is worthy of comparison to Tracy Chevalier's Girl with a Pearl Earring and Donna Tartt's The Goldfinch . . . Just as a painter may utilize thousands of fine brushstrokes, Smith slowly creates a masterly, multilayered story that will dazzle readers of fine historical fiction.”

“In this wonderfully engaging novel, centered on the paintings of fictional seventeenth-century Dutch artist Sara de Vos, Smith immerses the reader in three vibrant time periods . . . Rich in historical detail, the novel explores the immense challenges faced by women in the arts (past and present), provides a glimpse into the seedy underbelly of the art world across the centuries, and illustrates the transformative power and influence of great art. An outstanding achievement, filled with flawed and fascinating characters.”

“As in Girl with a Pearl Earring, the technical process and ineffable aspects of creating a masterpiece enrich this novel, but Smith had to invent his masterpieces because no works survive by the real-life Sarah van Baalbergen, who was the first woman admitted to the Guild of St. Luke. Smith’s paintings, like his settings, come alive through detail: the Gowanus Expressway, ruins of an old Dutch village, two women from different times and places both able to capture on canvas simultaneous beauty and sadness.”