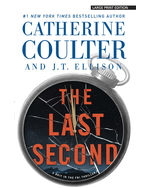 Galactus, a French company, has just launched a communications satellite into orbit that is carrying a weapon: a nuclear-triggered electromagnetic pulse. Galactus’s Dr. Nevaeh Patel believes that in wielding the EMP, she is following the directions of the Numen, aliens who once saved her life. She thinks she can change the world’s destiny and become immortal with the Numen. The countdown has begun when Special Agents Nicholas Drummond and Michaela Caine are thrown into the pending disaster. They must stop the EMP that would wreak havoc on communication and electronic systems on Earth, resulting in chaos and anarchy.