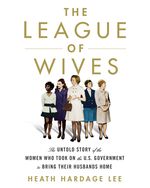 The League of Wives: The Untold Story of the Women Who Took on the U.S. Government to Bring Their Husbands Home

On February 12, 1973, more than one hundred recently released American prisoners of war arrived in the Philippines. These former Navy and Air Force pilots had endured years of brutal torture, deprivation, and solitary confinement in Vietnamese prisons, the worst of which was The Hanoi Hilton. Months later, they learned that their rescuers were their wives, who had formed The National League of Families and been the POW and MIAs most fervent advocates. These women lobbied government leaders, conducted a savvy media campaign, conducted covert meetings with antiwar activists, and helped code secret letters to the prisoners — all to facilitate their husbands’ freedom.