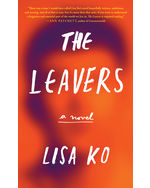 Winner of the 2016 PEN/Bellwether Prize for Socially Engaged Fiction

One morning, Deming Guo’s mother, an undocumented Chinese immigrant, goes to her job at a nail salon and never comes home. Set in New York and China, The Leavers is a vivid examination of borders and belonging. It’s the story of how a boy comes into his own when everything he loves is taken away, and how a mother learns to live with her mistakes.

“Ko’s debut is a sweeping examination of family through the eyes of a single mother, a Chinese immigrant, and her U.S.-born son, whose separation haunts and defines their lives. Ko’s stunning tale of love and loyalty to family, to country is a fresh and moving look at the immigrant experience in America, and is as timely as ever.”

“Touching upon themes such as identity, determination, addiction, and loyalty, the author clearly shows readers that she is an emerging writer to watch. Ko’s writing is strong, and her characters, whether major or minor, are skillfully developed. Readers who enjoy thoughtfully told relationship tales by authors such as Lisa See, Jamie Ford, and Nadia Hashimi will appreciate.”

“. . . skillfully written . . . those who are interested in closely observed, character-driven fiction will want to leave room for The Leavers on their shelves.”