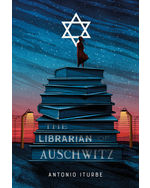 The Librarian of Auschwitz

Based on the real-life experience of Dita Kraus, imprisoned in Auschwitz by the Nazis, this is the incredible story of a fourteen-year-old girl who risked her life to keep the magic of books alive during the Holocaust. Out of one of the darkest chapters of human history comes an extraordinary story of courage and hope.

“This novel is one that could easily be recommended or taught alongside Elie Wiesel’s Night and The Diary of Anne Frank and a text that, once read, will never be forgotten. VERDICT A hauntingly authentic Holocaust retelling; a must for YA collections.”

“A sophisticated novel with mature themes, delivering an emotionally searing reading experience. An important novel that will stand with other powerful testaments from the Holocaust era.”

“Though no punches are pulled about the unimaginable atrocity of the death camps, a life-affirming history.”