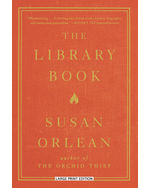 On the morning of April 28, 1986, a fire alarm sounded in the Los Angeles Public Library. The fire was disastrous: it reached two thousand degrees and burned for more than seven hours. By the time it was extinguished, it had consumed four hundred thousand books and damaged seven hundred thousand more. Investigators descended on the scene, but more than thirty years later, the mystery remains: Did someone purposefully set fire to the library — and if so, who?

“A lovely book . . . Susan Orlean has once again found rich material where no one else has bothered to look for it. . . . Once again, she’s demonstrated that the feelings of a writer, if that writer is sufficiently talented and her feelings sufficiently strong, can supply her own drama. You really never know how seriously interesting a subject might be until such a person takes a serious interest in it.”

“Vivid . . . Compelling . . . Ms. Orlean interweaves a memoir of her life in books, a whodunit, a history of Los Angeles, and a meditation on the rise and fall and rise of civic life in the United States. . . . By turns taut and sinuous, intimate and epic, Ms. Orlean’s account evokes the rhythms of a life spent in libraries . . . bringing to life a place and an institution that represents the very best of America: capacious, chaotic, tolerant and even hopeful, with faith in mobility of every kind, even, or perhaps especially, in the face of adversity.”