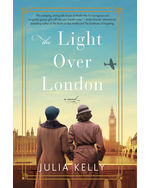 The Light Over London

While clearing out an estate, Cara Hargraves finds a World War II-era diary and a photograph of a young woman in uniform. The woman is Louise Keene, a nineteen-year-old from a Cornish village who has a wealthy suitor. In 1941 everything changes for Louise: she meets Paul, a dashing RAF pilot, and joins the Gunner Girls, a female anti-aircraft gun unit within the British Army. As bombs fall on London, Louise finds comfort in the knowledge that she and Paul will be together at war’s end. But when a bundle of her letters to him are returned unanswered, she learns that wartime romance can have a much darker side.