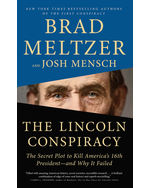 
The Lincoln Conspiracy: The Secret Plot to Kill America's 16th President - And Why It Failed

Everyone knows the story of Abraham Lincoln’s assassination in 1865, but few are aware of the attempt to kill him in 1861. The conspirators, part of a pro-Southern secret society, planned to assassinate Lincoln in Baltimore as his inauguration train passed through Baltimore en route to the Capitol. The plot was investigated by famed detective Allan Pinkerton, who infiltrated the group with undercover agents. Had the assassination succeeded, there would have been no Lincoln Presidency, and the course of the Civil War and American history would have forever been altered.

“A delightful addition to popular literature on the Civil War era.”

“Meltzer and Mensch maintain suspense despite the known outcome of the story, and convincingly counter claims that Pinkerton made the whole thing up for publicity purposes. Readers new to the “Baltimore Plot” will appreciate this comprehensive and well-written overview.”

“Energetic. . . . A brisk political thriller centered on a nefarious plot to murder Lincoln before his inauguration. . . . A sharply drawn episode.”