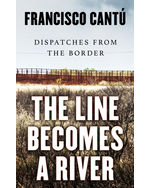 The Line Becomes A River: Dispatches from the Border

Francisco Cantú’s mother, a park ranger and daughter of a Mexican immigrant, raised him in the scrublands of the Southwest. Cantú joins the Border Patrol, tracking people in remote regions, hauling in the dead and delivering the living to detention. He tries not to think where the stories go from there. Plagued by nightmares, he leaves the Patrol. But when an immigrant friend visits his dying mother in Mexico and does not return, Cantú must know the whole story. In The Line Becomes a River, he makes urgent and personal the violence our border wreaks on both sides.