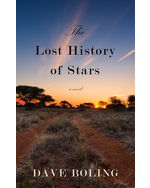 The Lost History of Stars

Early in the Boer War, fourteen-year-old Lettie’s father, grandfather, and brother are off fighting the British. Meanwhile she, her mother, and her younger brother join thousands of Afrikaner women and children detained in cramped, disease-ridden concentration camps. Brave and defiant, Lettie is a figure of abiding grace, and her richly drawn story is impossible to forget.

“(Boling’s) informative and illuminating story is heartfelt and deeply affecting in its dramatization of a historic episode too little known here.”