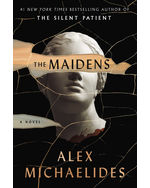 Edward Fosca is a murderer. Of this Mariana is certain. But Fosca is untouchable. A handsome and charismatic Greek tragedy professor at Cambridge University, Fosca is adored by staff and students alike — particularly by a secret society of female students known as The Maidens. Mariana Andros is a brilliant but troubled group therapist who becomes fixated on The Maidens when one member is found murdered. When another body is found, Mariana’s obsession with proving Fosca’s guilt spirals out of control. Mariana is determined to stop this killer, even if it costs her everything — including her life.