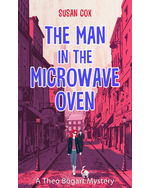 
The Man in the Microwave Oven

Fleeing from a murder and family tragedy in her native England, Theo Bogart changed her name and built an undercover life in a close-knit San Francisco neighborhood. After a confrontation with a difficult neighbor, Theo fears her secrets are about to be uncovered. When the woman who threatened to expose her is murdered, Theo is embroiled in the kind of jeopardy she crossed an ocean to escape. Worse yet, dangerous family secrets have followed her. She finds herself fighting to protect herself, her family, and her new friends, aware that one of them might be a murderer.