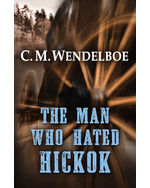 
The Man Who Hated Hickok

It’s 1876 and Cheyenne — long a haven for thugs and thieves — has taken on an air of civility. Until Wild Bill Hickock comes to town and humiliates a local gunman’s mentally-challenged brother to the point of suicide. Ira Drang vows to hunt Wild Bill and kill him. Broke, Ira takes work as a shotgun messenger on the notorious Cheyenne to Deadwood stage — to make it across the Black Hills after Wild Bill. It’s no surprise when the stage is held up just out of Cheyenne — by Ira’s longtime rival. The man’s daughter was murdered, and he knows the killer is on that stage. Ira understands that nothing will stop him — just as nothing will stop Ira’s pursuit of Wild Bill.