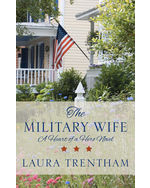 Harper Lee Wilcox has been marking time in Kitty Hawk, North Carolina, since her husband Noah’s death nearly five years ago. Living at home with her mother, and her son turning five, Harper fights a growing restlessness. Her best friend Allison’s husband, a SEAL who served with Noah, came home physically healed but fighting PTSD. With three children and unable to help him, Allison is at her wits’ end. Seeing an opportunity to help Allison as well as a network of military wives who support her idea of starting a string of coffee houses close to military bases, Harper crosses paths with Noah’s best friend and SEAL brother.