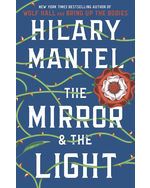 
The Mirror & the Light

“The longed-for final volume in Mantel’s magnificent trilogy is also a stupendously knowledgeable, empathic, witty, harrowing, and provocative novel of power and its distortions...Astute, strategic, sly, funny, poignant, and doomed, Cromwell rules these vivid pages, yet every character and setting resonates, and Mantel’s virtuoso, jousting dialogue is exhilarating . . . [A] timeless saga of the burden of rule, social treacheries, and the catastrophic cost of indulging a raving despot.”

“Magisterial . . . Mantel’s craft shines at the sentence level and in a deep exploration of her themes . . . The series’ first two books won the Booker Prize ― the third, rich with memory and metaphor ― may be even better.”