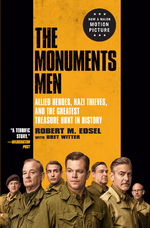 As Adolf Hitler attempted to take over the western world‚ his armies were methodically seeking the finest art treasures in Europe. The Fuehrer had begun cataloguing the art he would collect and the “degenerate” works he would destroy. Behind enemy lines‚ often unarmed‚ a special force of American and British museum directors‚ curators‚ and art historians raced against time to prevent the destruction of thousands of years of culture.

"A fast-moving narrative that effectively captures the excitement and dangers of their mission."