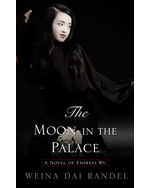 The Moon in the Palace

A concubine at the palace learns quickly that there are many ways to capture the Emperor's attention. Many paint their faces white and style their hair attractively, hoping to lure in the One Above All with their beauty. Some present him with fantastic gifts, such as jade pendants and scrolls of calligraphy, while others rely on their knowledge of seduction to draw his interest. But young Mei knows nothing of these womanly arts, yet she will give the Emperor a gift he can never forget.

Mei's intelligence and curiosity, the same traits that make her an outcast among the other concubines, impress the Emperor. But just as she is in a position to seduce the most powerful man in China, divided loyalties split the palace in two, culminating in a perilous battle that Mei can only hope to survive.

"This eloquent first novel follows the life of a young girl during China’s Tang dynasty (618–907). . . . This story of a woman who made her own destiny and has been often vilified is a must for historical fiction fans, especially those fascinated by China's glorious past."

"Like fragile yet strong silk threads, Randel’s beautifully composed debut ensnares readers in the dynamic story of the young girl who would become Empress of the Bright Moon. Randel’s novel is an impressive tale of lethal court intrigue that is seductive and alluring. It is a story of one woman’s rise to power, but also of the relationships between the women of the palace. Readers will be transported by the colorful, fairy-tale-like story."