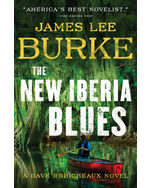 Detective Dave Robicheaux first met young Desmond Cormier in New Orleans. Now, twenty-five years later, Cormier is a Hollywood director, but Robicheaux must question him after discovering the body of a young woman who disappeared near Cormier’s estate. As the investigation continues, it includes an escaped inmate, the mob, the deranged Chester Wimple, and the dark ghosts of Robicheaux’s past. Ultimately, it’s up to Robicheaux to stop them all, and he will have to summon a light he’s never seen or felt to save himself — and those he loves.