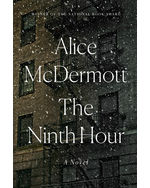 On a dim winter afternoon, a young Irish immigrant opens the gas taps in his Brooklyn tenement, determined to prove ― to the subway bosses who fired him, to his badgering, pregnant wife ― “that the hours of his life belong to himself alone.” His suicide, though never spoken of, reverberates through many lives ― testing the limits and the demands of love and sacrifice.

“In this enveloping, emotionally intricate, suspenseful drama, McDermott lures readers into her latest meticulously rendered Irish American enclave. . . Like Alice Munro, McDermott is profoundly observant and mischievously witty, a sensitive and consummate illuminator of the realization of the self, the ravages of illness and loss, and the radiance of generosity. . . McDermott’s extraordinary precision, compassion, and artistry are entrancing and sublime. . . This is one of literary master McDermott’s most exquisite works.”

“Everything that her readers, the National Book Award committee, and the Pulitzer Prize judges love about McDermottt’s stories of Irish-Catholic American life is back.”