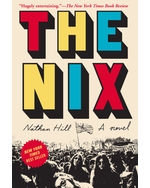 A Nix can take many forms. In Norwegian folklore, it is a spirit who sometimes appears as a white horse and steals children away. In Nathan Hill’s remarkable debut, a Nix is anything you love that one day disappears. From the Midwest to New York City to the ’68 Chicago riots, The Nix explores the resilience of love and home, even in times of radical change.

“Failed writer and English professor Samuel Andresen-Anderson prefers to spend his lonely days slaying dragons online in the World of Elfscape, but is lurched back to reality when his estranged mother Faye becomes a news sensation for attacking a presidential candidate. At turns poignant and comic, and with keen insights into academia, popular culture, the counter-culture, the financial crisis and mass media, this bravura performance introduces a major new talent. For fans of John Irving, Michael Chabon and Donna Tartt.” — Bill's Bookshelf Selector, Bill Kelly