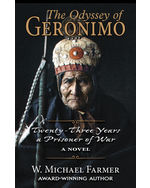 
The Odyssey of Geronimo: Twenty-Three Years a Prisoner of War, A Novel

A Will Rogers Medallion Award-Winning Author

The Odyssey of Geronimo, based on history and Apache culture, but told through his eyes using the truth from fiction, is a revealing epic of his strengths, weaknesses, and character. As a prisoner of war for twenty-three years, Geronimo rose to become a national “superstar,” and became an astute businessman. During his captivity, Geronimo fathered two children, lost three wives, and married two more. When he died from pneumonia after sleeping drunk all night in a cold rain, he had a small fortune in a Lawton, Oklahoma, bank from selling his mementos. He was hated by some of his own people, loved by others, but respected by all.