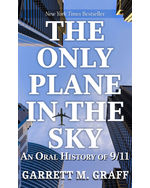 The Only Plane in the Sky: An Oral History of 9/11

The Only Plane in the Sky tells the story of the 9/11 as it was lived. Drawing on never-before-published transcripts, recently declassified documents, and oral histories from nearly five hundred government officials, first responders, witnesses, survivors, friends, and family members, Garrett M. Graff paints the most vivid and human portrait of the September 11 attacks yet. The Only Plane in the Sky weaves together the personal experiences of the men and women who found themselves caught at the center of an unprecedented human drama. The result is a searing exploration of humanity on a day that changed the course of history.