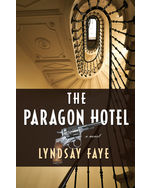 The year is 1921, and “Nobody” Alice James is on a cross-country train, carrying a bullet wound and fleeing for her life after an illicit drug and liquor deal gone horribly wrong. She befriends Max, a black Pullman porter who reminds her achingly of Harlem. Upon arrival in Portland, Oregon, Max leads Alice to the Paragon Hotel. Her unlikely sanctuary turns out to be the only all-black hotel in the city, and its lodgers seem unduly terrified of a white woman on the premises. Why was “Nobody” Alice James forced to escape Harlem? Why do the Paragon’s denizens live in fear? Where is the orphaned child who went missing from the hotel, and what sins are they hiding?