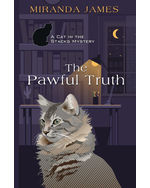 Charlie Harris has enrolled in a history course offered by young, charismatic professor Carey Warriner. Charlie feels a bit out of place; his fellow classmates are half his age, except for Dixie Bell Compton, another ‘mature’ student. When Charlie hears an angry exchange between her and their professor, his interest is piqued. He learns just a few days later that Dixie has been killed. As he and his Maine Coon cat, Diesel, step further into a tangled web of relationships, someone else is viciously killed. As Charlie races to unravel this mystery and to draw out the culprit, he may just have to put his own life on the line.