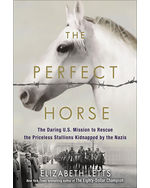 In the chaotic last days of the war a small troop of battle-weary American soldiers captures a German spy and makes an astonishing find — his briefcase is empty but for photos of beautiful white horses that have been stolen and kept on a secret farm behind enemy lines. Hitler has stockpiled the world’s finest purebreds in order to breed the perfect military machine — an equine master race. But with the starving Russian army closing in, the animals are in imminent danger of being slaughtered for food.

With only hours to spare, one of the Army’s last great cavalrymen, American colonel Hank Reed, makes a bold decision — with General George Patton’s blessing — to mount a covert rescue operation. Racing against time, Reed’s small but determined force of soldiers, aided by several turncoat Germans, steals across enemy lines in a last-ditch effort to save the horses.

“[Elizabeth] Letts, a lifelong equestrienne, eloquently brings together the many facets of this unlikely, poignant story underscoring the love and respect of man for horses. . . . The author’s elegant narrative conveys how the love for these amazing creatures transcends national animosities.”