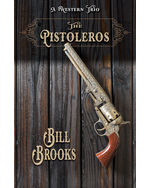 
The Pistoleros: A Western Trio

Three stories of different men, all pistoleros who live by the gun. There’s Frank and Jesse, drifting through life as cattle drovers and then soldiers under General Custer’s command, until an unexpected job offer puts them in the wrong place at the wrong time. There’s famed gunslinger J. C. Bone, who’s going blind and is pursued by a cold-blooded shootist determined to be the last gunfighter standing. And there’s Wesley Bell, a onetime desperado forced to take up his gun again, to end a murderous crime spree by his own brother. Each of these men must fight to survive unexpected odds in a West that often has little to give.