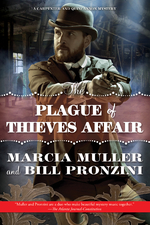 The Plague of Thieves Affair

John Quincannon has been hired by the owner of the Golden State brewery to investigate the "accidental" death of the head brewmaster, who drowned in a vat of beer. John is certain he can catch his quarry, but his partner, Sabina, is not sure she even wants to catch hers: Sherlock Holmes or, rather, the madman claiming his identity.