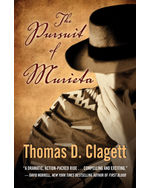 The Pursuit of Murieta: A Western Novel

It’s 1853. The notorious bandit Joaquin Murieta and his gang have ravaged the infant state of California for three years. Now‚ he wants to return to his wife in Mexico. He has no idea that California Rangers led by Ambrose Quick are after a murder suspect they believe is Murieta. Wounded after an exhausting chase‚ he denies killing the deputy sheriff. Not all the Rangers believe him. And there’s plenty at stake.