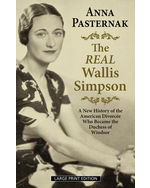 The Real Wallis Simpson: A New History of the American Divorcée Who Became the Duchess of Windsor

At the center of the most scandalous love affair of the 20th century, Wallis Simpson was accused of entrapping Prince Edward in a seductive web in order to achieve her audacious ambition to become Queen of England. But in this surprising new biography, Anna Pasternak tells a different story. Although flattered by the prince’s infatuation, Wallis never expected it to last. She never wanted to divorce her husband or marry Edward. But she hadn’t anticipated his absolute refusal to let her go. Caught in Edward’s obsession, Wallis became the perfect scapegoat for those who wished to dethrone a king they deemed unworthy to rule.