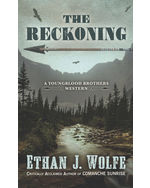 The Youngblood brothers, Jack and Emmet, are called back into service by Judge Isaac Parker. Sally Chisum, niece of the late John Chisum of New Mexico, sells one thousand head of cattle to the Indian reservation in Fort Smith. Nine drovers off the reservation agree to drive the herd from New Mexico to Arkansas. At the midpoint, just south of the Red River, the nine drovers are attacked and killed and the herd is stolen. Judge Parker assigns Marshal Jack Youngblood and his brother, Emmet, the daunting task of tracking down the men responsible for the gruesome crime and bringing them to justice.