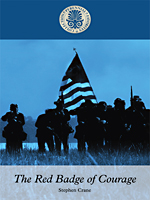 The Red Badge of Courage

More the story of the battle that rages within one soldier than the battle between Confederate and Union soldiers‚ The Red Badge of Courage established Stephen Crane's place in American literature and remains his most popular work. With no idea of the horrors of war‚ young Henry Fleming has romantic notions of the hero he will be. But when he enters his first battle his illusions are destroyed. Fighting for his life and scared‚ Henry must make a decision: run or stay.