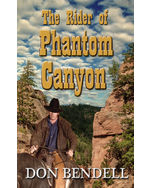 The Rider of Phantom Canyon

Cutthroat competition between railroad companies to lay track through the Royal Gorge territory is threatening to escalate into all-out war, with hired guns on both sides. If one man can bring peace to the territory, it’s half-Lakota lawman Joshua Strongheart. But while he braces himself to face down an army of gunfighters, his most dangerous quarry may be a ruthless businessman with a one-track mind and a heart blacker than coal.